⚠️ Your browser is not supported.

Internet Explorer is no longer maintained by Microsoft. This site will not work properly.

Please use a newer, safer browser like Edge, Firefox or Chrome.

Get the kids outdoors this Summer School’s out! (Didn’t they only just go back?!) Instead of looking ahead to days of screen time battles, you could try an interactive treasure hunt around Cambridge. Let the kids take the lead and have an adventure together!

But there’s a lot more to Cambridge than just the same old parks.

Now’s a great time to spend some time together in the city centre, solving puzzles and seeing some brilliant stuff you’d forgotten about!

Treasure Hunt Cambridge is a great way to reconnect with the city.

Maybe you’ve been into the city centre a million times- with Treasure Hunt Cambridge you’ll discover places, people and things you never knew with our treasure hunt route- discovering fascinating stories and unearthing hidden gems- there’s a lot to love about Cambridge, isn’t there?

There’s no time limit so you can take your time and make a full day of it. Take a picnic and go at your own pace, or stop along the way (we’ve planned a route that takes you past some of Cambridge’s best spots for coffee, snacks and cake!)

It’ll keep the kids out of mischief for a good few hours and they’ll be worn out after rushing around looking for clues. 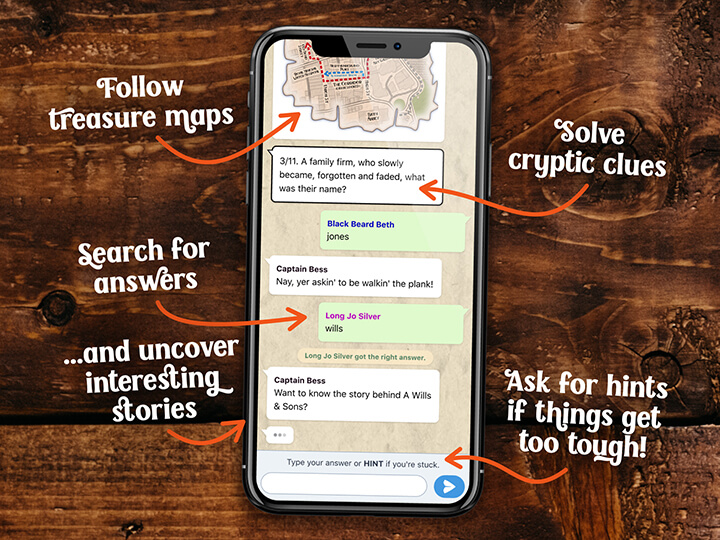 The game’s designed for grown-ups - so you’ll enjoy it - and it’s suitable for kids aged 8 and up.

You’ll need to work together to help them with the cryptic clues.

The whole route is pushchair friendly.

“So much fun, and an incredibly well though-out course. The riddles and clues were great, and we had a lovely time! Would definitely recommend to everybody.”